We will publish our latest news on this page.

We are aiming to publish a newsletter periodically to keep everyone updated with developments within the football club.

If you have any news items which you would like to see published here, please get in touch. 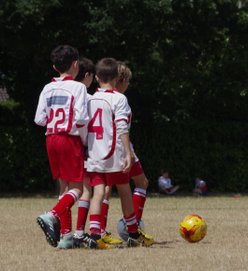 Each year our football club provides a Poppy to each player to stick onto their match day shirt in the weeks preceeding Rememberance Sunday. This year we haven't been able to do this, so instead, we've chosen to make a donation to the Royal British Legion.

We are also going to show our support to Marcus Rashford's campaign for free school meals to be provided in school holidays and the wider problem of child hunger that his campaign has highlighted. We have decided to make small donation to the West Berks Foodbank chairity to suport them in their work.

The amount of these donations will be equivalent to the amount we have traditionally spent on the Poppies. Please see the attached communication which provides some further details on why we have chosen to do this.

In November 2019, CSA 07 FC published our own guidelines on heading footballs.

This month, the English Football Association have issued their own guidence which now applies across all youth football in this country - this flyer provides a useful summary.

We are pleased that this new information is almost identical to our own guidence.

A medical study was recently published which established a link between heading a football and an increase in the chances of developing dementia in later life. In light of this study, some medical professionals have called for heading a football to be banned for all junior players.

In some countries, based on previous research into this subject, steps have already been taken to limit heading for young people. In the USA, for example, heading is now banned for u11 players, and only limited heading (in training sessions) is allowed from u11’s – u13’s.

Recently, it has been reported that the Scottish FA are considering a similar ban. UEFA and FIFA have also been approached to incorporate this into the laws of the game. At the moment, the English Football Association has not declared their position but there is clearly a broadening consensus around this subject. There are currently a number of additional ongoing studies including several with the English Football Association and the English Premier League which are also looking into the impact of heading a football.

CSA 07 FC have assessed the information available to us on this subject at the moment and have come to the following decision. Immediately, we will introduce the following protocols at CSA 07 FC:

We will keep this situation under review. If more information becomes available, we may update our protocols and guidance to our coaches. The welfare of our players is our priority at CSA 07 FC. We will continue to adopt a conservative approach to this issue.

We appreciate that this subject may provoke some strong opinion but our view is that we wish to make some small pragmatic changes which focus on the welfare of our players, whilst all the football authorities are considering their formal response.

After the success of Poppies4Kits last season, we again marked this Remeberence Sunday event by buying a poppy for each player to wear on their match day shirt. To remind everyone, this is done in partnership with Poppies4Kits. Further information about the work of this organisation can be found at www.poppies4kits.co.uk and @Poppies4Kits.

There are a couple of reasons that we’ve decided to do this again and we hope to make this an annual activity at our football club. Firstly, it is a very visible demonstration showing our respect for those from all nationalities who have fallen in conflict. Secondly, I hope this helps our younger generation connect a little bit more with the annual process of remembrance and to better understand why it is so important.

And finally, approximately half of the proceeds go directly to the Royal British Legion (www.britishlegion.org.uk). As our football club is set up as a charity, this aligns very well with our overall ethos.

We recognise that some people do not agree with wearing a poppy. If at any time you as parents or guardians or the players themselves feel uncomfortable then no one is under any obligation to wear one.

Thank you for your support this year.